Beauty
Is
Found
In
Function
~ox-{

Many individuals have shown interest in the equipment we use to produce our hand crafted items. In many ways they personify the beginnings of our life in the forests. It was then that we began to appreciate the simple beauty of living off the power grid. We were cast back in time to an era when simple effective tools became a means to live. They had to be reliable, rugged, easily repaired with things on hand. One attribute that is not so evident is that most often they were very quiet.

Yes, we had our vehicle instead of animal traction. And of course there was the chain saw. But what a great contrast in functionality and cost and independence. I say that seated here by the computer, listening to 60 cycle hum, which I must confess is an extreme annoyance to me. Don't get me wrong. I love being able to communicate and interact. But how many salmon are stuck at the base of dams or how much jeopardy do we find ourselves sitting under with nuclear heated water surging to torque the stators? It is a great inner conflict for us.

With that let me line out some of our equipment. Elegantly simple and yet profoundly effective and efficient for the amount of energy consumed; we present our wheels, looms and sundry other devices. Simply click on an image and you will be directed to the page of interest to view the details. 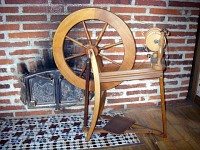 This is the Ashford spinning wheel. We acquired it in 1977 or there abouts. Alexandra has spun miles upon miles of double ply yarn using this tool. It has never broken down apart from making some adjustments or tightening a screw. It is our "workhorse" and still a favorite for my wife.

It has been to three states, three homesteading ventures and remains as stable and reliable as the day we purchased it back in the Colorado Rocky Mountain country. Simple technology and sturdy moving parts make it a good choice for rugged conditions. It doesn't sport fancy artistic components but it produces exquisite yarns nonetheless. The original design was made in New Zealand during WW II. They were inexpensive and used to spin wool for soldiers socks by the women of the homeland. 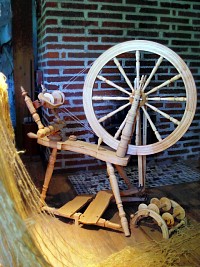 During the summer of 2007 during our annual trek to the Black Sheep Gathering in Eugene, Oregon, Alexandra feasted her eyes on this Kromski spinning wheel from Poland. We've attended the gathering since 1992. It is an international affair where fiber artists and shepherds gather to Oooo and Ahhhh over eachother's wares and livestock. Amidst the hustle and bustle of the bazaar like atmosphere we meet old acquaintances and glean new ideas. Invariably Alexandra uses this time to ply her skills at bringing something home. Usually it is a kid goat or angora buck for the herd. That year she glommed onto the Kromski wheel as wasn't taking no for an answer.

It is well crafted and in the native homeland of my ancestors. This endeared it to her all the more it seems. Old habits break hard. She is wielding the new wheel quite well but when serious focus is needed she resorts to the old faithful Ashford. I suspect it is only a matter of time before the ease of use will win her over to the new wheel. 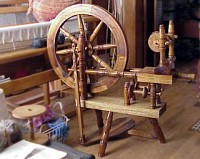 The Late J.R. Kennedy lived approximately 20 miles from us in Days Creek, Oregon. He was a wood crafter who devoted considerable time to building spinning wheels out of indigenous wood species. Alexandra's mother had always been enamored with her daughters skills and took a particular liking to Mr. Kennedy's Myrtle Wood Wheel. Made from Oregon Myrtle/California Bay Laural (Scientific Name: Umbellularia Californica - Family: Lauraceae.) it now graces our home as a precious gift bestowed upon us. It has very unique features that are well illustrated on the web page dedicated to it. Click the image and have a look.

All of our looms are four harness floor looms. They are listed here in course of due interest. 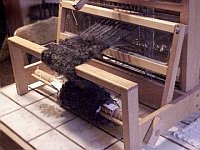 We've had this loom for many years, extending back to the mid-1970's. Alexandra uses it mainly for crafting scarves and waist bands of mohair. 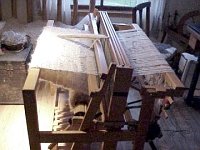 This is the original floor loom we purchased for weaving mohair throws and blankets. We have a goodly supply of reeds for it. Made of Eastern Maple and built by the Loomcraft of Denver, Colorado. 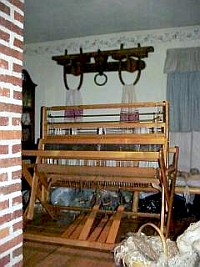 The Folding 48 inch Jack Flor Loom is an antique built in Portland, Oregon circa 1920's It is made of a beautiful tiger stripe maple. I has the unique ability to be folded and stored in a smaller area. That is a big advantage in our small cottage which is packed with wheels and looms galore. The original reeds that came with the loom indicate that it was originally used for creating very fine cloth. 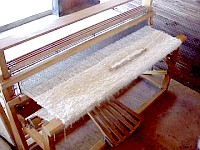 Our LeClerc Loom is also of Eastern Maple. We use it mainly for weaving the large sections associated with area rugs. Various of our patrons prefer to have a wider span for their throws and this loom accommodates that preference.